I’ve only used my Convergent caller a coupe times, one of which was outstanding as a sounder came running across a wheat field like a cattle stampede a couple months ago. Ran it 4 times the past couple of nights in different places, pulled a lone boar in at one, got one’s attention at a distance but he didn’t come in and two were bupkis. All of this has been at night.

The one we called in last night was pretty funny... it was place #2 for the night, we pulled off the field road in my Pioneer at the edge of a tree line to have us in the shade from the moon light, facing a small tank about 100 yds away and we set the caller out about 30 yd in front of us. I have a helmet mounted thermal I scan with, my lease bud has his Pulsar trail on his rifle, we’re sitting in my Pioneer. We’re running maybe 10 minutes, I’m looking down range when I hear my bud whisper something, I turn to ask him to repeat and see that a boar had either come down the road or came in from behind us and was standing about 15 ft from the side of the Pioneer looking at us like “What are you two mf’ers doing?” As my bud starts to get his rifle up and swing toward him, he took off. (2] hits from his 300BO and he called it a night. 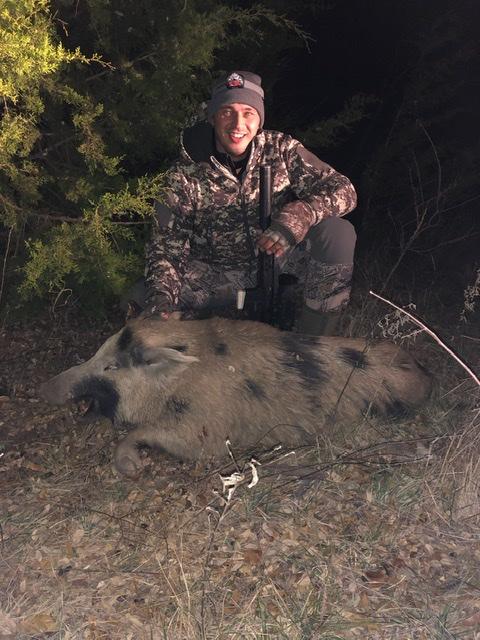 So my question... Anyone have any input on how to use the caller in general, when you have nothing in sight vs when you have their attention and the same with boars vs sows? It just seems to me using something like the Hysteria sound when you have one eyeballing you but not coming, is like doing a duck hailing call when they’re feet down getting ready to land. I don’t know what fires up a boar to want to come fight/investigate and same for a sow. Piglet sounds fire them up? I have been kind of randomly starting with something low key, then ramping it up a couple notches before running with the Hysteria sound as my primary.

I have used sow hysteria on hogs I could see in the next pasture only to have it chase them away, as in they took off running.

I only use calling when I bother to have the caller and nothing else is working.
Posted By: dfwroadkill

I bought the sidewinder because it is small and makes a lot of sound. It doesn't take up much room and slides in my backpack. I also converted it to bluetooth. As sounds go, I'll try a variety of calls such as sow hysteria, the rally, Vampigra, etc. I go by the feel of what I am seeing or hearing. If activity isn't ocurring, I'm not afraid to switch. The two biggest mistakes I have observed is playing the sound too loud and not waiting long enough. Hogs can hear the call for a long way. It can take some time to get there. Another thing, keep calling when you take a hog down. Other hogs may still be coming. If a sounder is present and running, they will sometimes turn around and come back. In this scenario, I often switch to another sound. For you mag dumpers, try holding off on the trigger finger. Shoot once or twice...they will either stop or not run as far sometimes. We were out the other night and went 5 for 5 calling hogs. Took 5 hogs on the last session. The call works.
Posted By: CharlieCTx

Interesting.... I could definitely be in the play too loud category. How long do you give a sit before you move-on?

Thanks
Charlie
Posted By: TigerCobra

Ive tried using these calls out of 8 hunts at the LBJ Grasslands and I've called 2 hogs so far and first came running in within 2 mins of playing and it was using Courting boars in the morning the other time was using Chow time in the evening near some oak trees covered in acorns and The Rally has called in many deer lol so maybe I'm not waiting long enough for the hogs to find it but its fun.
Posted By: aggiehunter03

I have hog sounds on my Foxpro. I've called in one big group and 7-8 single boars. Biggest one I ever killed came in to Boar Sparring.
© 2022 Texas Hunting Forum