Lots of story/info here and several pics, but I will try and stay concise and not run on too much.

I have a spot where pigs have been coming in real good to a barrel, several different bunches of them. My daughter has REALLY been wanting to shoot a pig. She turns 12 today, and has been a shooter and hunter for years. Killed her first deer at 6, and goes coyote calling with me quite a bit. She is a good shot too. You guys with kids know how things are this time of year though. Ball games, stock shows, homework, trying to coordinate all kinds of events with with the right weather conditions for your stand can be tough. But last Friday things lined up right and we headed out. Got there about 45 minutes before dark, put some more corn in the barrel and scattered some around, then pulled the truck into out shooting spot.

I have a shooting lane cut back through the mesquite that puts us about 85-90 yards from the pig barrel. We nose the truck up into a couple big mesquites in a very thick spot, it hides the truck real well. Then we just drop the tailgate, sit on some coolers up next to the cab, and shoot right out of the back of the truck using a tripod and shooting sticks.. Once it gets dark we are concealed very well, and have a snug comfy spot where she feels safe. She is shooting a 6.5 Grendel AR with a Photon XT 6.5x50 digital NV with illuminator, and a Silencerco Omega. The bullet is a 100 ELDM pushed by a max load of Benchmark, velocity about 2625 fps. I have a 14.5 Adams piston 556, Vortex Strike Eagle 1-8, Surefure weapons mounted light, and a Specwar 556K. Load on the gun is a 65 SGK, no idea how fast it is going, but it has been a very good load for me on lots of different animals. I shoot coyotes, deer, pigs, pretty much anything with it.

It wasn't quite dark yet and I wasn't expecting anything for another 20-30 minutes or so when I heard my daughter whisper, "There are pigs!" I look up and sure enough there are two pretty decent pigs walking up to the barrel. That makes me happy since it is still barely light enough for me to shoot without turning on lights. She gets the NV turned on and up on target. We whisper back and forth about which one is bigger (of course, she wants the bigger one), and make a plan. She is going to shoot the left pig, and at her shot I will shoot the right one. The pigs go back and forth behind the barrel and it takes a few minutes to get both in the open with clean shots. She tells me she is about to shoot, I put the dot of my scope right in the center of my pigs head, since it is pretty much facing me, and take about half the slack out of the 3 lb trigger. At her shot, pretty much instantly I squeeze the last bit out of the trigger and watch my pig hit the ground like a sack of bricks. Her pig took off running hard to the west. We could only see it for maybe 15 yards before it was obscured by brush.

We talk back and forth about the shot, she swears she was on it good and it was a clean shot. About that time she says she just heard a pig squeal back in the direction hers ran off. We get out of the truck and walk down to the barrel to look at the pig there, That is when things start to get strange. Of course I look at the pigs head and can see where my bullet entered at the inside corner of the right eye. Then my daughter says, "See Dad, here is where I hit him, but it is further back than where I aimed, I didn't make a good shot." The pig has a broadside 6.5 cal crossing shot high through the back of the lungs, and a 556 hole in the front of the face. It just doesn't makes sense to me. I looked around a little bit just to the west but couldn't see another pig laying out there. I told her it was still early, other pigs might come in later, so we drug the dead pig towards the pickup about 40 yards and settled back in the pickup.

We sat another hour but nothing else came in. The whole time I am replaying the scenario in my head, and asking her questions. I come up with 2 possibilities. First is that she hit the pig she was aiming at, bullet passed through, and hit my pig too. In which case there is another wounded or dead pig out there to the west in the cover. Second possibility is that somehow in low light one or the other of us got mixed up and shot the wrong pig. In which case she hit it broadside first, then it must have turned, and I caught it in the face when it did. At any rate I know I have to go look in the mesquite and knee-high broomweed. We load up the first pig. I turn the magnification on the scope on my AR low, kick on the light, put her behind me with another light, and we start looking in the brush. We spend a few minutes looking, but she is really nervous and doesn't like that, so we head on home and take some pictures. This is the pig we both shot, you can see the exit from the 6.5 Grendel. Heart girth measurement was 36" 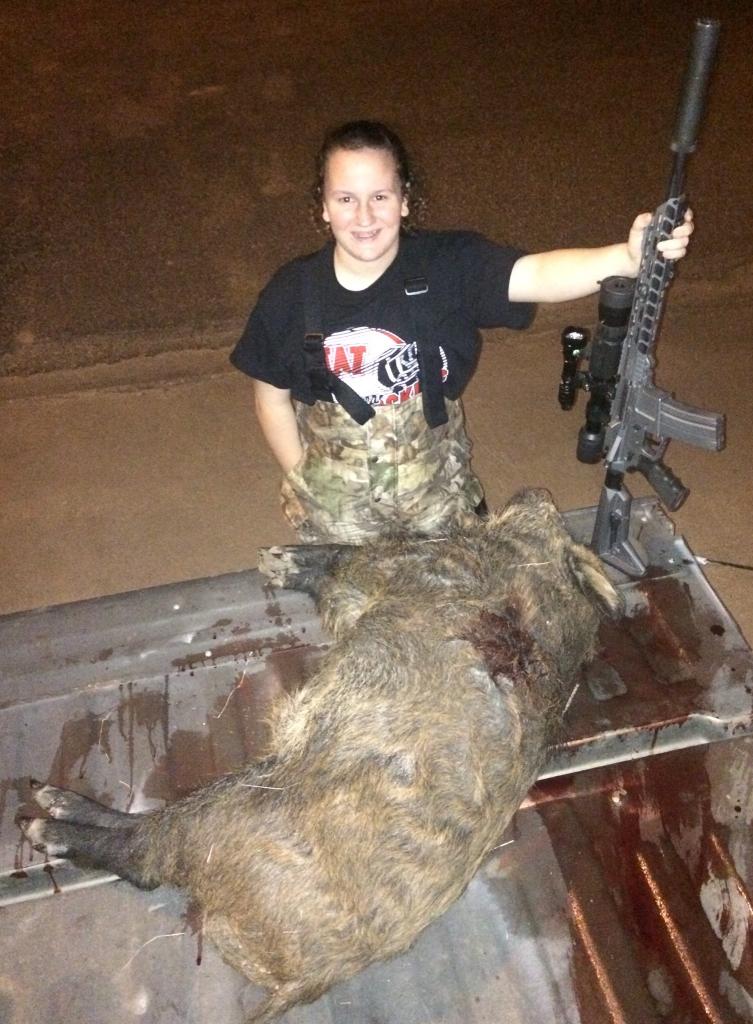 The next morning we had to leave early to go to a goat jackpot in Wheeler. We got back after lunch and everyone went down for a nap but me. I drove back out there and filled the barrel full, then went looking for another pig again in good light. Sure enough, I found her pig about 20 yards from where we quit looking the night before. He was a little bit bigger than the second one, and she punched him. A little high, but straight through right in line with the shoulders, right where I told here to shoot it. You can see the exit from her shot right above the shoulder. I took some pictures and sent to her, then drug it off so it wasn't on the trails coming in to the feeder. So, theory 1 confirmed. She shot her pig good, bullet passed through, hit my pig which was partially superimposed behind it, and passed through it as well. Her pig ran about 65 yards before piling up.

All in all, pretty dang happy with my daughter and her first 1 1/2 pigs, lol. 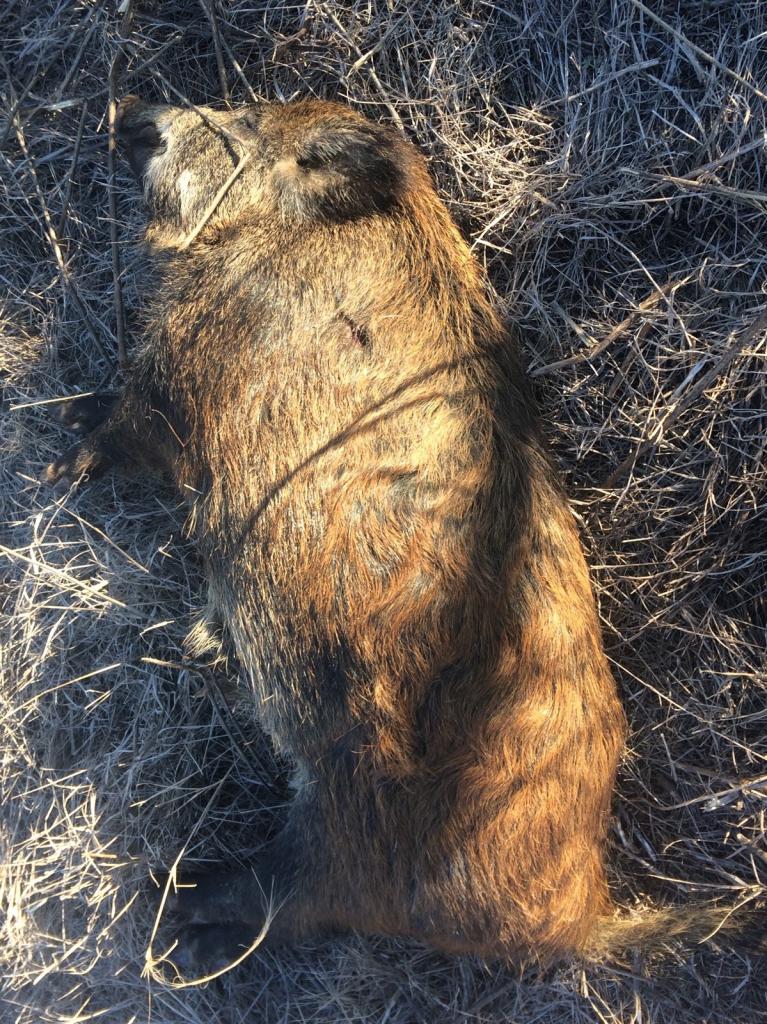 The first pig I had dumped out at work the night before, just because I was out of time. I still wasn't sure on ballistics so I decided to do a little necropsy. My 65 SGK from the 556 entered slightly below the inside corner of the right eye, traveled slightly above the esophagus, down the neck, and into chest cavity. I did not open the chest cavity to see if it hit the heart or not, but suspect it came very close. I did split the hide down the center of the back and peel down both sides to get an idea of the bullet track for the 100 ELDM. The first pic you can see entry (on bottom) and exit (on top). 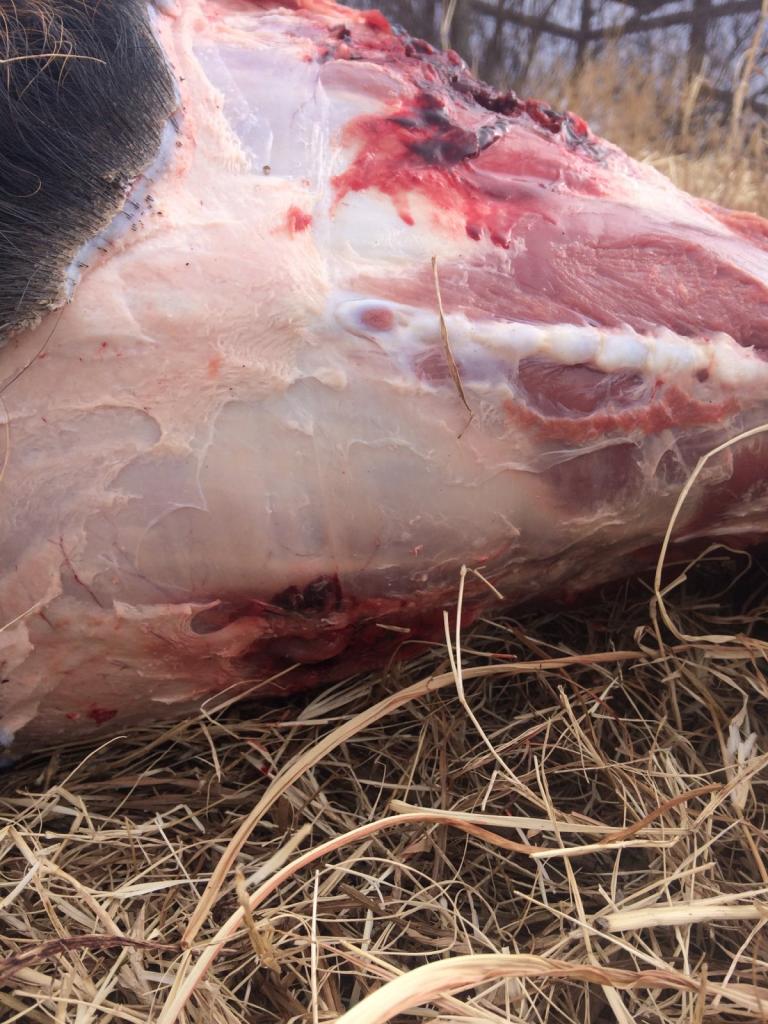 Next pic is the exit wound of the second pig. I thought that was pretty dang good penetration. If anything though, I think I would have preferred it to open a bit faster than it did. 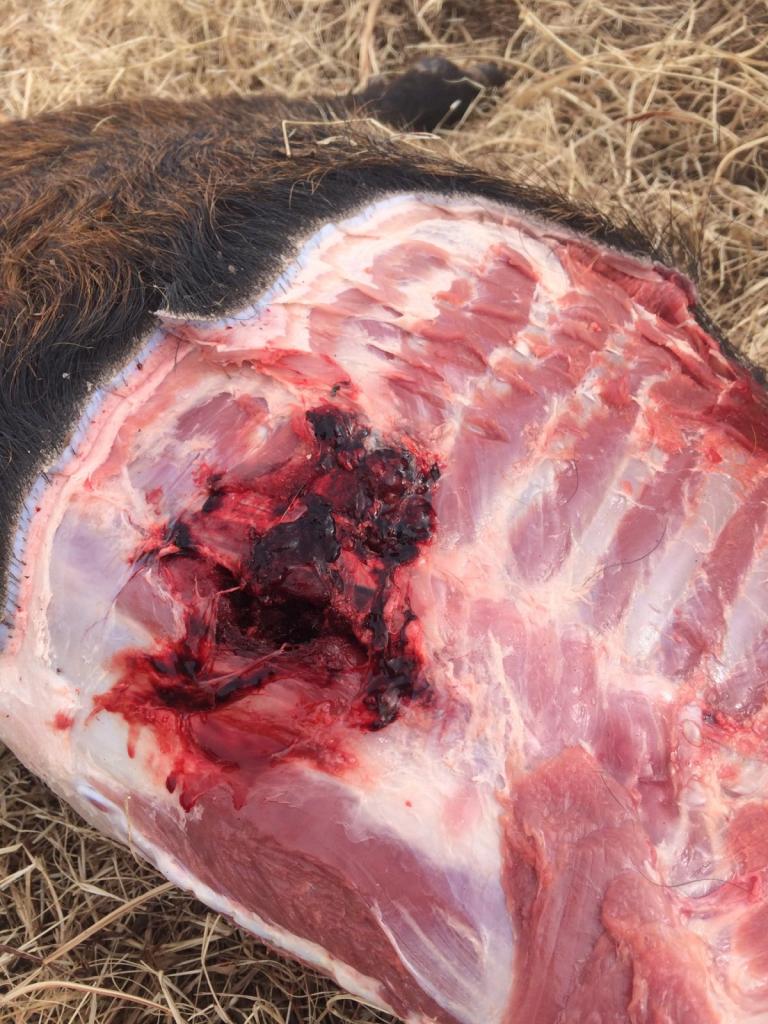 Nice! Some serious damage to that pig considering the bullet had gone through another hog first.
Posted By: Double Naught Spy

Thanks Guys!
Posted By: TKandMike