5 down and out of the breeding pool!

I set up by one of the feeders before dawn yesterday to see if I could ambush a sounder that was appearing regularly on the game cam. Sure enough right at first light they came thundering in and started vacuuming up corn. I picked out the biggest one and she went down hard. The rest scattered. Then the little black one came back, checked out the dead one and began eating corn again. I was about to send him to Hog Heaven when the balance of the sounder arrived. I shot another, DRT. Instead of running off, the remaining 3 started running around, squealing like mad. I knocked two of them down, but that little black dude was streaking around so fast, changing directions, jumping over hog bodies, I couldn't get a clean shot at him. I just tried to keep him close to being in my crosshairs; he finally stopped and off he went to HH. Two of the larger hogs needed a quality assurance shot, so I used my 9mm pistol at point blank range to arrange their passage. The whole episode didn't last much more than 5 minutes, but it was wild and crazy (and fun!). 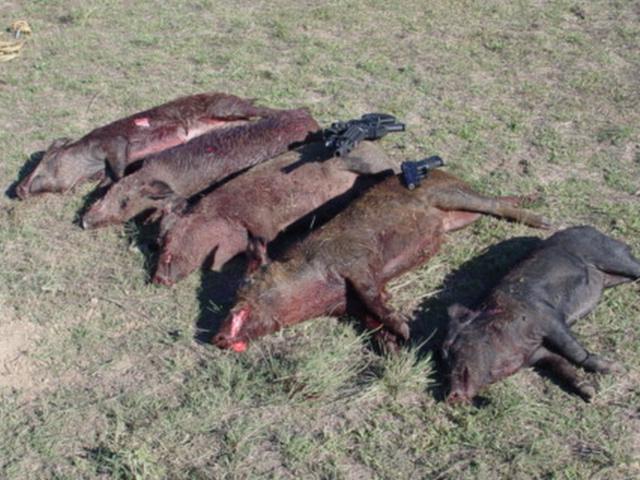 You have got to love it when they stick around after the first one falls!

Nicely done, makes ya want to do it again tomorrow...
Posted By: SnakeWrangler

I love it when a plan comes together
Posted By: Rock Rancher