Projects are keeping me young...


Especially since the subjects are older than I am!

So after stamping the Model 67 Facelift Project complete, I found myself without any "gunny" stuff looming over me. Lord, we can't have that...next thing you know the She-Wolf will have me engaged in whittling down the list of stuff that "needs doing" around the place. In the hot, hot summer. Oooh, bad plan...

A couple of years ago, another old "farm gun" came to live with us: a Winchester Model 90 in .22 Winchester Rim Fire (WRF). The Model 90 is a slide-action, exposed hammer takedown piece designed by none other than John M. Browning and his brother, Matthew. Many will remember the Winchester Model 62...the Model 90 is the 62's grandparent (the Model 1906 came in between). If you're not familiar with the round, don't be ashamed...it takes a not inconsiderable amount to grey hair to even remember when ammo for this one was even REASONABLY available! I'd scrounged up a supply of one of CCI's special runs of 45 grain hollow-point ammo and put a couple of rounds down range to confirm function. The old gal not only functioned, but seemed to hit consistently...at least the rock I'd selected as a target hopped around regularly. With other more pressing issues demanding my time, the rifle had gone into the vault at that time.

Dragged into the daylight again today, I considered what (if anything) I might do with the old gal. First things first, though...let's get a BIT more scientific about evaluating accuracy. My plan was to load up and head down to my range, but the afternoon heat and blast-furnace wind made that idea less than appetizing! So, I opened the garage door behind my Kubota UTV, stuck a target up 25 yards away and, taking a standing rest against the roll bar, I squeezed off five rounds.

Now, expecting gilt-edged accuracy from an 80-90 year old rifle with utilitarian sights and a trigger pull a few pounds heavier than the 5 1/2 pounds that the whole rifle weighs is asking a bit much...so I was more than pleased to see that the five rounds plunked cleanly into a tidy 1" group! OK, so that's gonna warrant proper bench time to follow-up.

As to aesthetics, the Model 90 has been there and back...on foot. How much "pretty" I put into this one will depend on how it shoots and how ambitious I'm feeling! 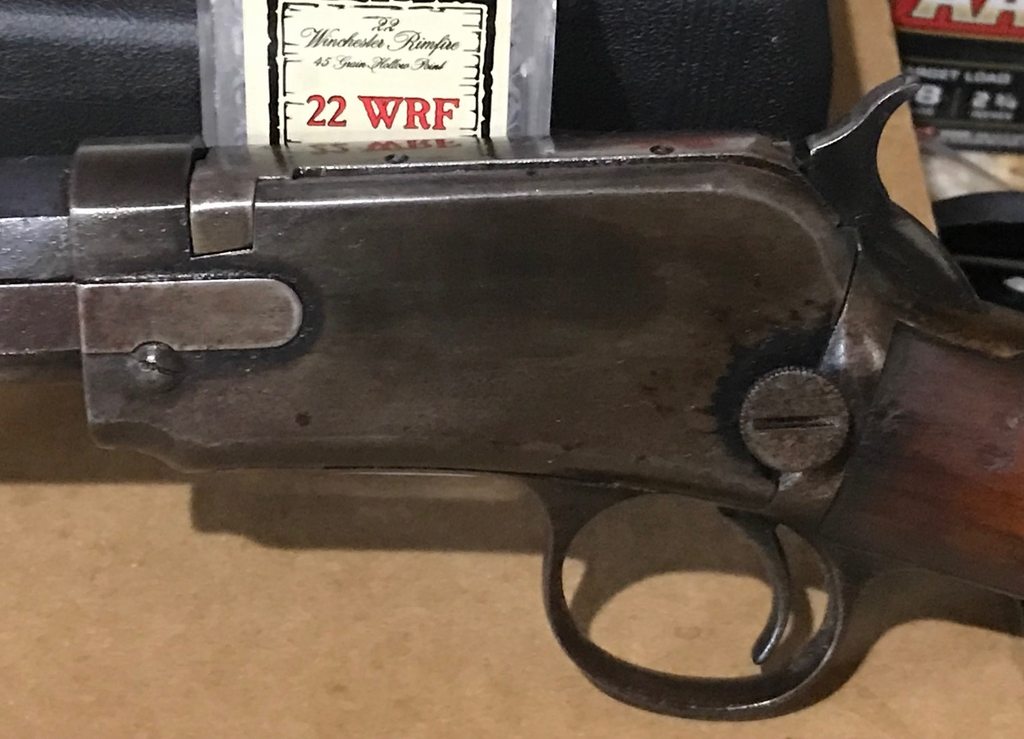 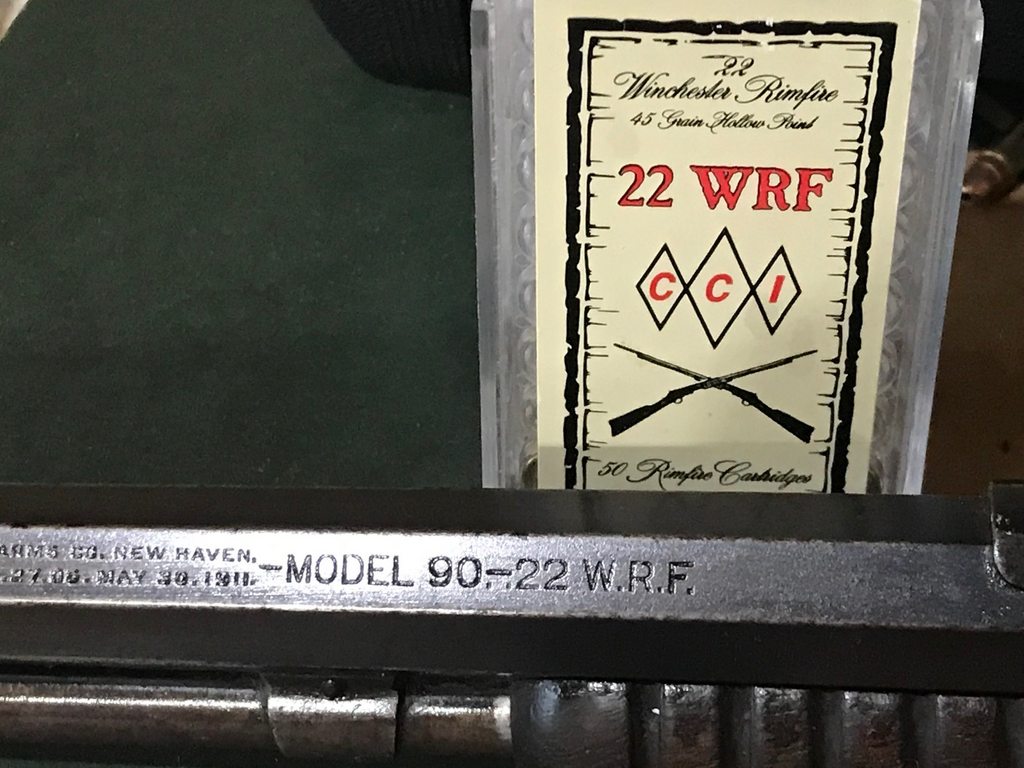 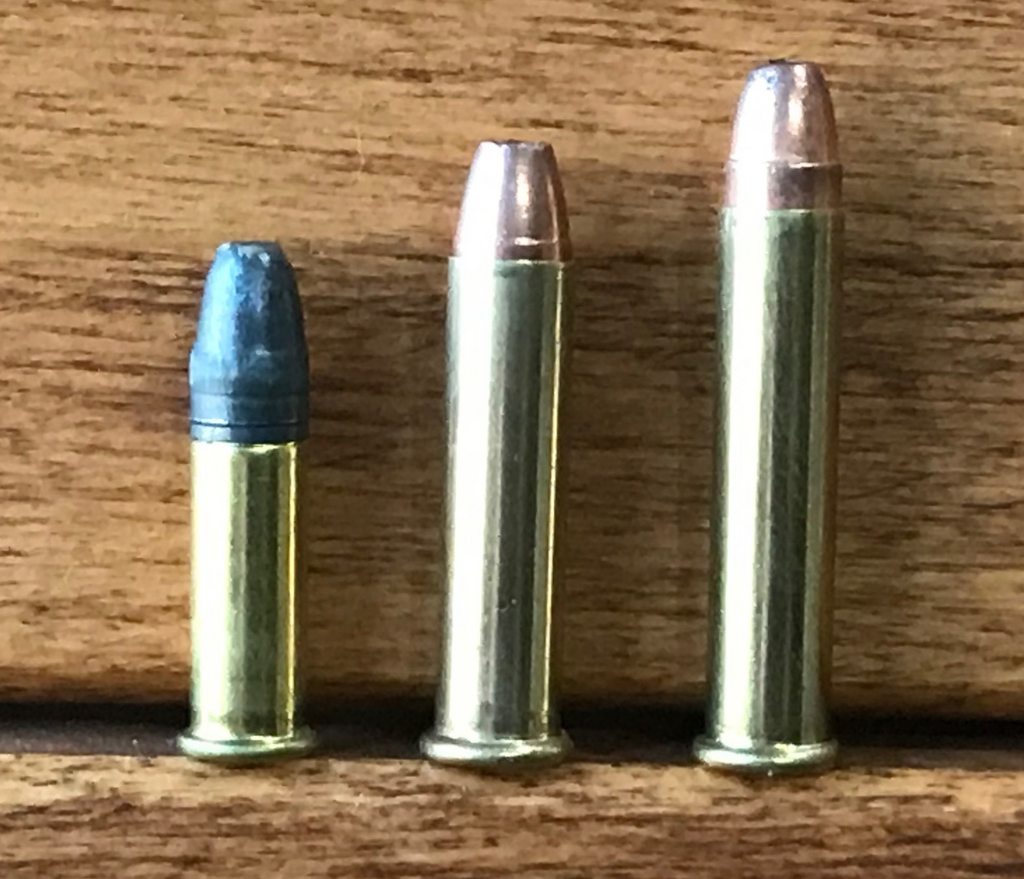 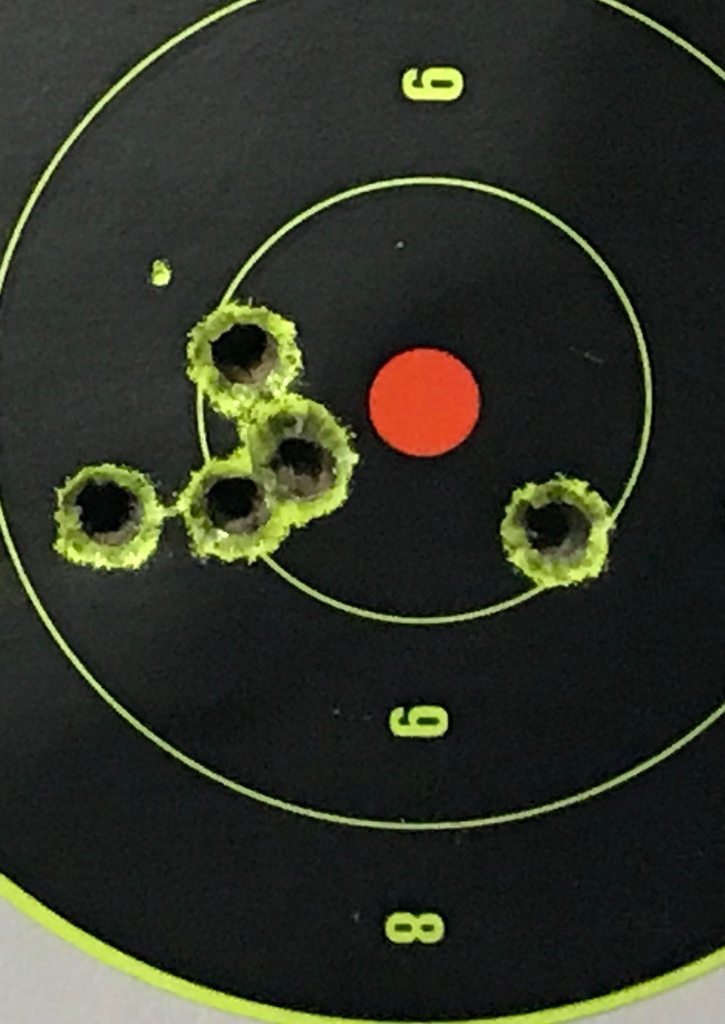 There is certainly enough accuracy potential evident here to warrant scrubbing the barrel and spending the ammo and bench time to see what's what. With that question answered, I'll decide on any restoration.

Looks like it will be worth the work, look forward to the progress.

I have kicked myself for not buying one of those when 22 WRF was like hens teeth and unobtanium. Now that it is available it would have been nice to get it.

A 62A is my current favorite walk the woods 22, those little rifles are slick and fun.
Posted By: Bar-D

Very cool old rifles. I worked one over for a friend of mine last year. Tried my best to buy it from him, he turned me down. At least I got to shoot the old girl before turning it over to him.
https://texashuntingforum.com/forum...693/re-model-1890-winchester#Post8455693
Posted By: 218 Bee


Before the mercury and the wind came up this morning, I had the Model 90 down on the bench for further accuracy evaluation...and was hit with (to quote Monty Python) "a poser".

First group off the bench at 25 yards: five rounds in 1 1/8". Not too shabby but certainly not impressive. One hole that I can't explain: clearly a round hit and yet accompanied by a tear similar to a key hole. Hmmm. I got nothin'... 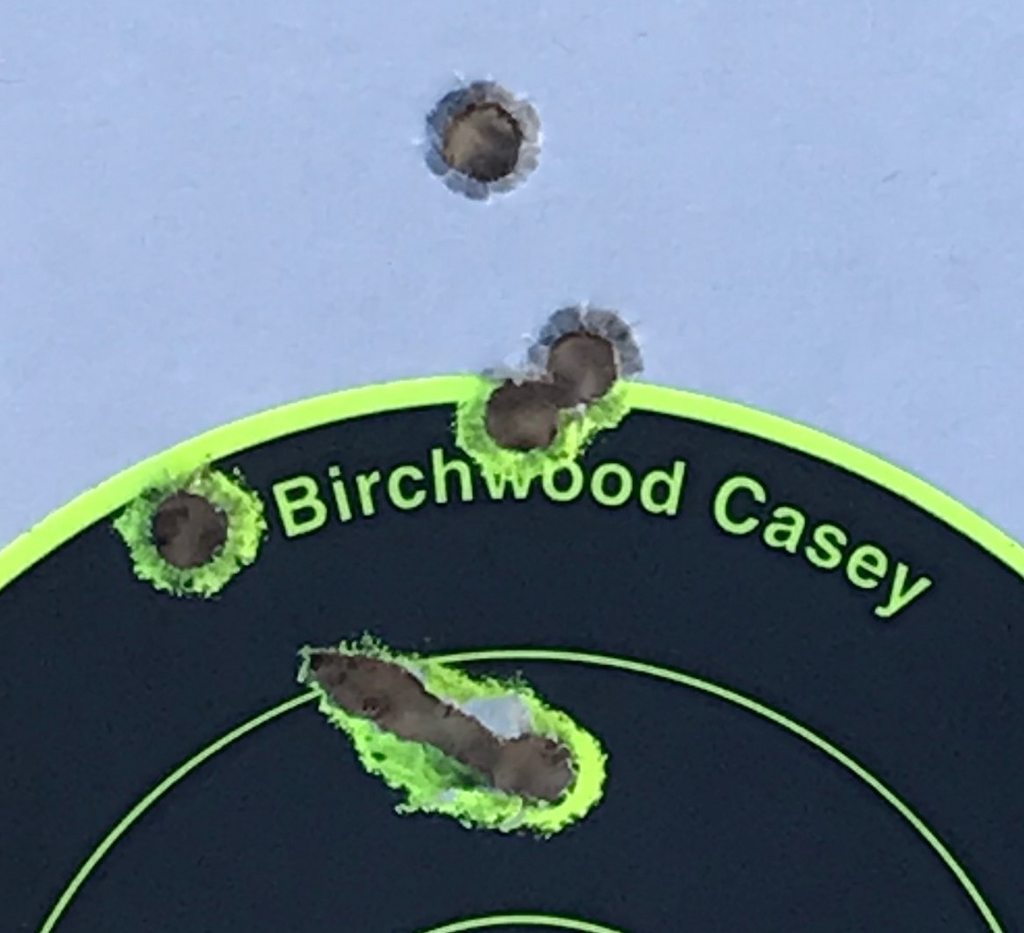 Second group: five rounds in 7/16". If it did that all the time I'd be impressed...but one shiny group isn't a trend. It certainly warrants further work. A good barrel cleaning, at least. 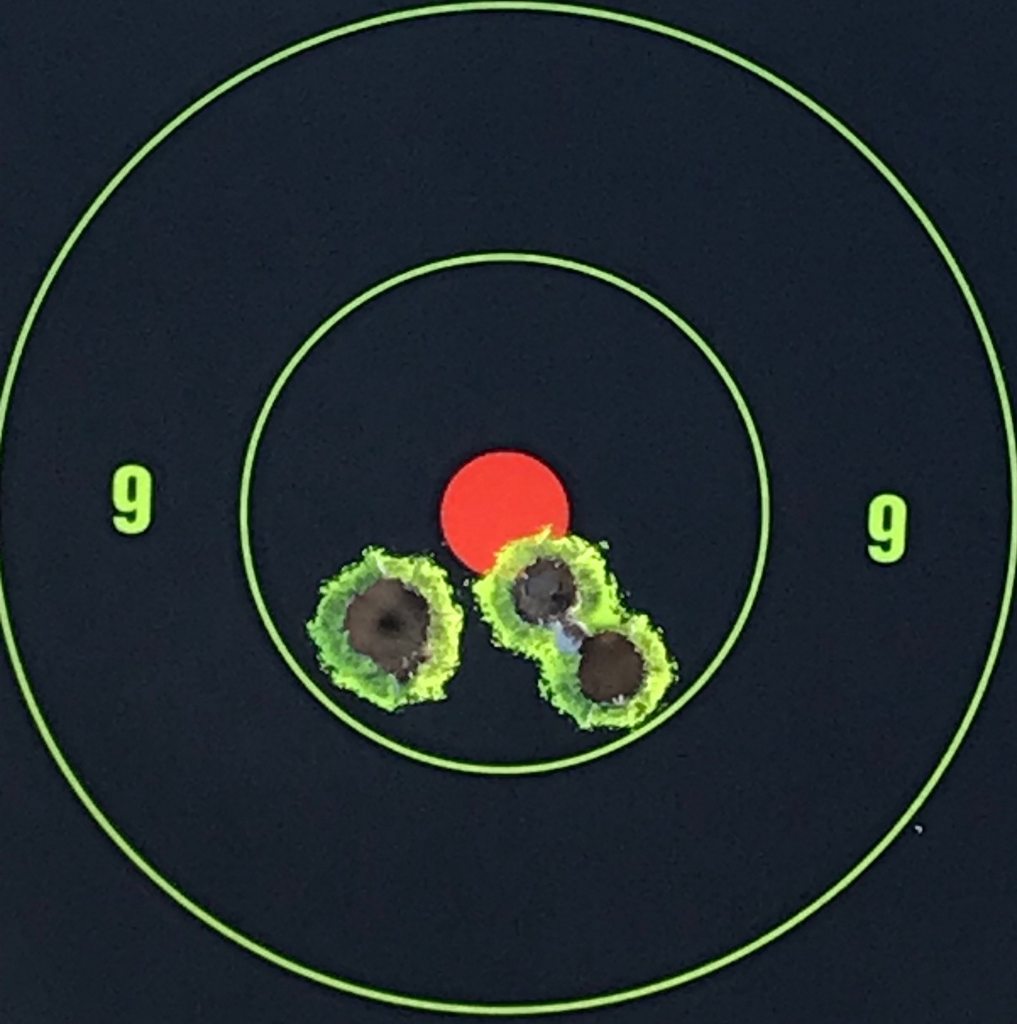 Older pump and lever guns can present with barrel problems caused by previous ownership. Either the barrel was completely neglected because it couldn't be accessed easily or worse, it got cleaned BADLY from the muzzle end. Which would this one be? After a bit of work (like scraping the rust out of the screw slot that would allow me to remove the action bar, I finally got the bolt removed. A solvent-soaked brush went into the breach and had pretty smooth sailing until about the final four inches of barrel...and then things started to get bumpy. Patches. More solvent and brush work. More patches. No real signs of rust; just fouling. Things smoothed up considerably after enough elbow grease was applied but it's certain that something has gone on in there over the years. Another bench session when the weather permits will shed more light on the future of this project!
Posted By: kmon11

What backing did the target have? Curious if there could have been some thing hard on or in it that shot out to the side right side of the hole looks nicely round
Posted By: 218 Bee

Originally Posted by kmon11
What backing did the target have? Curious if there could have been some thing hard on or in it that shot out to the side right side of the hole looks nicely round

That's odd, right? I've had hundreds of thousands of slugs leave ROUND holes. Had a few leave PROFILES. NEVER had one leave BOTH!

Gotta believe that it was a flaw in the target itself that the slug's passage ripped out. Seriously, if the barrel had a stabilization problem the next group wouldn't have ever happened.

Just another of the eternal mysteries of launching projectiles, I guess!